PRESSURE in the Obedience Ring
or
"Why did my dog NQ he never does this?" 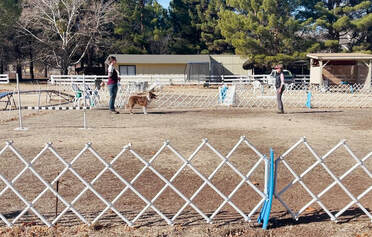 Petra Ford introduced us to the pressures that influences a dog's performance in the obedience ring (from the environment, from barriers, from the judge). When I started working on this after Petra's Fenzi webinar it was clear how much another person in the ring influenced Beckett's focus, comfort and ability to perform an exercise correctly. Petra Ford had an interesting Fenzi webinar on Nov. 29, 2020 where she talks about all the PRESSURE that dogs encounter in obedience which can affect their performance with things such as recalls, moving stand, straight fronts, not responding to command discriminations, signals, and much more.

Picture above is from the video below and work we are doing on "pressure from the judge". In this video, the pressure from behind in the Open command discrimination. ​

NEW VIDEO 9/19/21: SHOWING THE EFFECT OF PRESSURE FROM THE JUDGE IN A UTILITY RUN.
Practice in Chino Valley, AZ with 5 other obedience friends... My goal was to increase the pressure from the judge for Beckett's Utility and Open runs. There are many different ways that judges add pressure to the dog often causing an NQ error since the dog's mind is focused on that pressure and not the exercise that they might otherwise do perfectly. Beckett had a lovely Utility run that I was very happy with until the final SIGNALS.... He missed the DOWN signal since he was obviously focused on the judge (Paula) behind him. I watched a video of a top obedience competitor and her dog also missed a signal due to the judge being close. I need to be aware of this and make my signal slower and larger. Otherwise I was very happy with his run especially his GO OUTs, looking at me for glove retrieve, heel work and mostly good fronts and finishes. Thinking I will focus on a finish to his right now and. not so much to the left. VIDEO BELOW

STARTING TO INTRODUCE PRESSURE..
This game is a fun way that she introduced to help dogs learn and experience PRESSURE from behind. As with all games they must be FUN, the dog must be HAPPY and ENGAGED and not STRESSED.  This video is the very early training I have been doing with Beckett working on helping him experience pressure from behind. There are more pieces to be added such as having a person walk up behind the dog.
I was very interested in why 4 Golden's in a row at the December 2020 National Obedience Championship (NOC) NQed their DIRECTED JUMPING. Then I reflected on the FENZI PRESSURE webinar that Petra gave and realized with experienced dogs as they obviously were, it had to have something to do with pressure ......

What I found in the DIRECTED JUMPING was fascinating.... He could not do the jump in the direction where the Pam was standing almost next to the jump near the ring.... soooo interesting. Yet he could do it when we changed her position to the corner of ring in front of that jump or when she was on other side of the ring across from the jump.

He could not do his signals when she was near but when she moved he could.

Video 1: We have been working on pressure from the judge with another person. For this video we have Beckett's FAVORITE PERSON -- Stacy -- that he always thinks he has to meet and greet. I asked Stacy to put a lot of pressure on Beckett moving into him, standing close and for Command Discrimination extreme pressure from behind by standing as close as she could behind him.

​Video 2: Continuing our work on pressure in the obedience ring, we are going to see how much Beckett has learned and feels more confident with when he does the Utility Go Out jump. A few weeks ago we tried him with the person being the judge on the other side of the high jump and he could not go over it until she released the pressure by moving. See earlier videos and how we worked on this. Clearly there are some handler issues here like leaning in toward the jump for the bar jump but I was doing this intentionally since this was his first go with his favorite person, Stacy, acting as judge. She was right in front of the jump and where he landed. I asked her to move in on him after he landed for his fronts to put pressure on from behind. He handles this pressure for both jumps well

NEW: 3/14/2022: Practicing Pressure from the Judge Based on Show Experience: BLOG